The essential dichotomy of light and dark is a constant rhythm of existence. A deep fascination for it is embedded within the core of every child. As their innate affinity for all forms of this universally played game of peek-a-boo evolves into a full range of ever more subtle variations, it remains a primarily reigning favorite throughout every child’s life. This is due to how strong of a basis it is for learning how to better understand and appreciate all of the cyclical rhythms of life.

For several weeks during my work as a studio teacher, I explored the dual concepts of light and dark alongside several small groups of 1, 2 and 3 year old children. Below are my reflections of the observations that I made during our sessions. It is my hope that these observations will prove useful in supporting me and my fellow educators at The Nest as we develop our understanding of the ways in which children encounter and familiarize themselves with the concepts of light and dark. 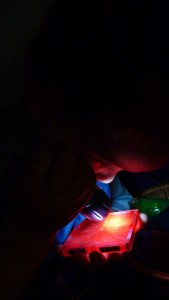 After having an overhead projector as the only source of controllable illumination for quite some time, the children at The Nest were provided with several miniature flashlights as well as additional darkened spaces within which they were encouraged to use them. The children were already familiar with semi-transparent materials because of their experiences with the overhead projector but these materials took on new life through the use of the flashlights. The flashlights allowed for much more, intense, focused and precise illumination which supported the children in viewing these materials (and others) in more dramatic and intimate detail.

Another well celebrated benefit of using hand-held lights was the ability to create light in motion, which all of the children enjoyed doing in their own unique ways. By spinning, throwing, waving and directing the flashlights with focused intentionality, the children were able to witness how such movements and selective pauses in movement caused the light to take on drastically different shapes and forms based on how it was moved. 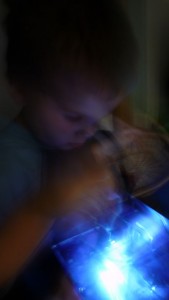 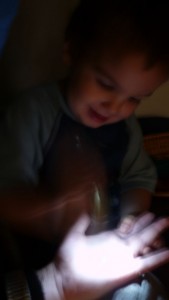 For example, Nathaniel concentrated on moving the flashlight in bouncing patterns upon several materials of interest – rhythmically increasing and decreasing the spread of the light beam’s range in the process. 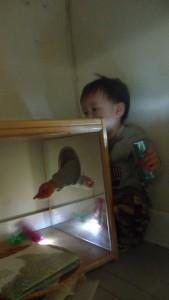 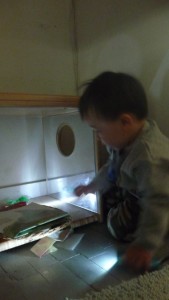 Peter (1 year old) used the flashlights to create a game that helped him to affirm his ever strengthening understanding of object permanence which is a vital concept that is learned throughout the overall development of very young children. The game consisted of Peter placing a flashlight through a hole in a shelf and dropping it inside where it could not be seen. Then Peter would look inside of the shelf and find the dropped flashlight before repeating the process. This game could have been played with any small object but within the shadows of the open closet in which Peter played, the flashlight displayed it’s presence with more drama than most other objects would have – especially with the reflection of the mirror within the shelf increasing the flashlight’s luminosity. 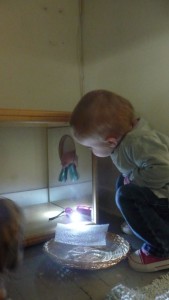 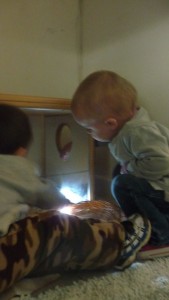 Interestingly, Quincy (also 1 year old) independently conceived of and played this game as well, without having seen Peter previously playing it himself just moments before. In her version of the game however, she began to watch the flashlight drop rather than allow that aspect of the game to remain an unseen element of the process. Peter observed this supplemental discovery with understandable interest and appreciation. 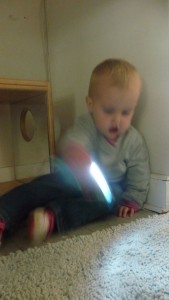 The conclusion of this game arrived when Quincy incidentally discovered how the texture of the rug in the closet was affected by casting light upon it and abandoned the game in favor of taking a few moments to earnestly investigate this phenomenon – literally casting the rug in a different light in order to see how it could change appearance based on the ways in which she chose to illuminate it. 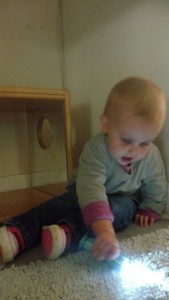 These various games of peek-a-boo, hide-and-seek and question-and-answer are all conceptually tied to the timeless dichotomy of light-and-dark. These games comprise two of the most essential facets that determine our ability to learn and successfully navigate through life, namely; a sense of humor and the excitement of self-initiated discovery. Children naturally delight in periods of uncertainty, innately confident that, at some point, a shock of illumination will reveal itself to them. They are also sure that those moments of brightness are always well worth braving the darkness of doubt to discover.