Exploring the Value of the Basic Block

Although the basic wooden block has been a classic childhood material since Friedrich Froebel founded the first kindergarten in the early 19th century, modern testing culture has forced schools to push out open-ended materials like blocks from their rightful place in the classroom. At a play-based school like The Nest, however, educators seek to honor the heritage of these diminishing materials and revisit why they were introduced to children in the first place.

The 2014-2015 Blue Jay classroom, which serves children aged one to two years at the start of the school year, initially hosted a basket of assorted wooden blocks that children would periodically delve into. In early 2015 my co-educator Leah and myself noticed a growing interest in building as well as an increased proficiency in the children’s block work. In effort to foster this pursuit, we chose to devote an entire week to blocks in March. We replaced our main shelves, previously stocked with animal figures, trains and train tracks, cars, and other mixed materials, exclusively with at least a hundred different wooden blocks. On Monday, the children were intrigued by the newly focused classroom, for we had never before been able to provide an appropriate quantity of blocks shapes nor amount of physical space for building due to the limiting size of our classroom. Surprisingly, there were practically no requests for items we had temporarily put away. 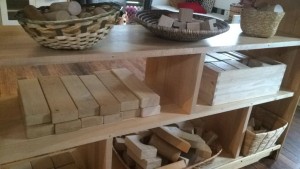 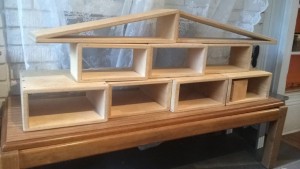 We began the week with unstructured free play in the new environment. After an initial period of discovering the expanded variety of shapes and sizes, the children got to work building all sorts of structures. In the following days, we offered provocations as well as an opportunity to build freely. On a few days, the children encountered specialty blocks for building castles alongside framed photos of castles and famous buildings from around the world. Each day of block week, however, led to more revelations about the importance of block play. 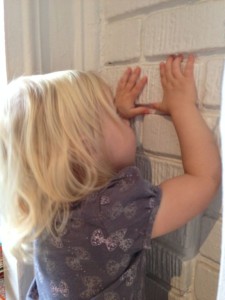 2 year old Helena recognizes the bricks of the classroom fireplace as a kind of block on Day 1. 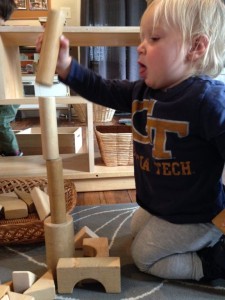 Despite their modest appearance, blocks are an incredibly versatile tool for young children. While building, children are inherently exploring more complex scientific concepts such as gravity and balance. Blocks also provide a unique way to physically engage in artistic endeavors; in fact, Frank Lloyd Wright credits his early interest in architecture to his involvement in Froebel’s block curriculum. Proportion, pattern, symmetry, and design are several intrinsic tenets of block play that facilitate an immersive, whole-body experience of creativity. There can also be a social component to block play. Some kinds of blocks can be heavy for younger children and thus may prompt two friends to work together. Similarly, towering structures may require smaller and/or younger children to cooperate with taller and/or older peers to fulfill their goals. Not only do these common block play scenarios stimulate teamwork, they also encourage children draw upon their burgeoning planning and problem solving skills. Last but certainly not least, blocks offer the opportunity for unparalleled fun. Young children, including those in elementary grades, easily and joyfully become absorbed in the unlimited possibilities of a simple block set.

Upon reflecting on the week, we felt the new block arrangement should maintain its presence in the room due to the innumerable benefits we observed. We found new locations for some of the temporarily displaced materials, and are able to continue to enjoy the traditional block as a centerpiece of our classroom life. Our Block Week experience was a meaningful experiment by children and adults alike to make fresh connections with a classic childhood material. We discovered science, art, sociality, and joy – and we wholeheartedly encourage you to revisit the simple pleasure of the block in your own home or classroom, too. 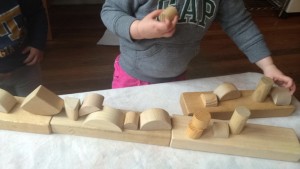 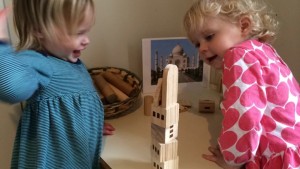 1.5 year olds Wren & Lila work together on a Taj Mahal-inspired structure on Day 4. 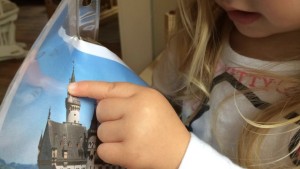 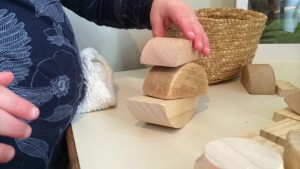 1.5 year old Wren continues to play with balance on Day 3. 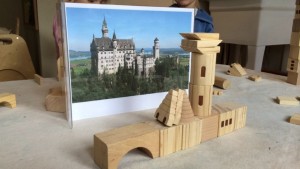 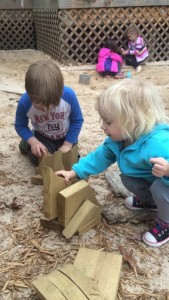 4 year old Henry (from the Hummingbird class) & 2 year old Helena build with loose parts on the playground during Block Week.