by Kristi Cameron on September 4th, 2011

Wired magazine recently published an article entitled “Children Play Like Scientists Work” which described research at MIT and Stanford University that demonstrated the ways in which children naturally experiment and problem solve through play in a manner that emulates the scientific method. The article resonated with me when I read it, and I was reminded of it again after an observation I made last week of a small group of children interacting with a lazy susan.

The encounter began when Henry and Sky approached a lazy susan sitting beside a variety of materials — small plastic bowls, large and smooth river rocks, and 2″x3″ rectangles of wood. As they placed items on the lazy susan, the children repeatedly spun it and watched with curiosity, interest, and surprise at the movement they created with their action. They seemed to quickly connect the spinning action with the objects that flew off of the lazy susan. 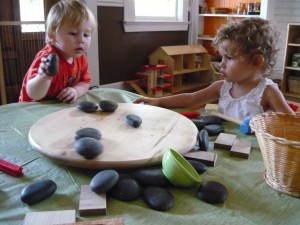 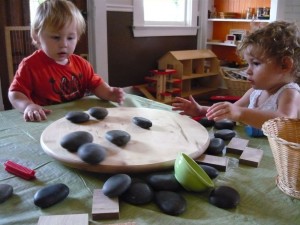 After a couple of minutes of experimentation, Sky approached Henry and held out a wooden and plastic hammer, as if to ask, “Would you like to try this on the lazy susan?” Henry did not responded to her offer, and Sky turned away with apparent dejection. Did he intentionally ignore her…or not? Was he so engrossed in his own experimentations that he didn’t even realize she was making an offering? Was the shape of the material offered by Sky too irregular for the phenomenon that Henry was repeatedly demonstrating? We wonder… 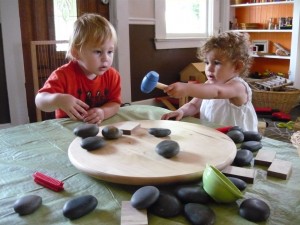 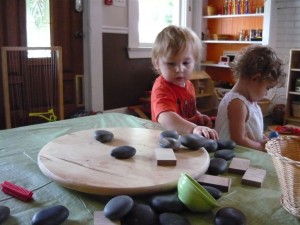 As she left, Sky took one final look over her shoulder at Henry’s experience. She was clearly still interested in the process that was occurring. 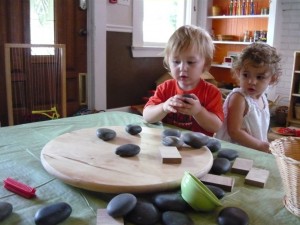 Henry continued his play alone for a period of time with great focus and intentionality. He experimented with the effect of different objects on the lazy susan, choosing purposefully which object he would place on it before giving it a spin. 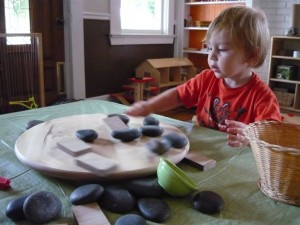 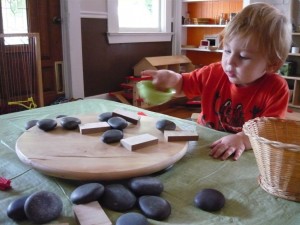 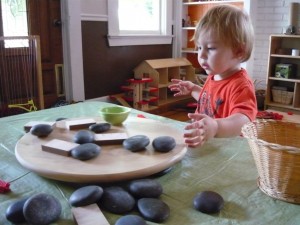 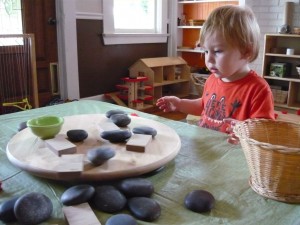 Soon Peter approached Henry and the lazy susan. In his hand he held two small wooden dice. Henry accepted these materials for experimentation. We wonder if the regularity of the shape was pleasing to Henry as he did his research. Or was he simply ready to incorporate new materials into his play in order to learn more? 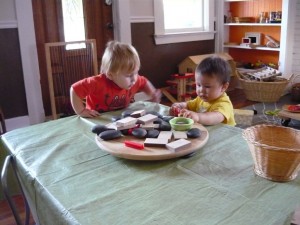 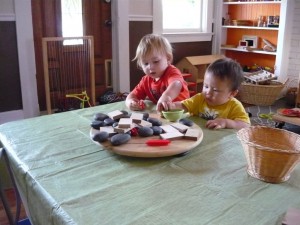 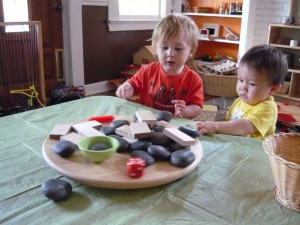 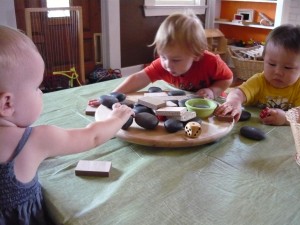 After approximately 5 minutes of observation with photography, I decided to videotape the remainder of the experience. The resulting 8-minute video is rich with insight into the processes of children as researchers. In the video you can see the focus and intentionality with which Henry continues to experiment as well as the interest that other children have in what he is doing.

After reviewing this video several times and sharing it with my colleagues, I was interested in learning more about the scientific processes that Henry was experiencing naturally through his play. I never took a physics class in either high school or college, so my understanding of the scientific phenomenon inherent to the experience with the lazy susan was fairly limited. While I could see interesting things happening as Henry played with the lazy susan, most of the concepts I observed were nameless for me. I did both internet research on physics and I sent the video to a friend who is a physics teacher for his insights into the scientific phenomenon evident in the experience. Through these exchanges, I developed a greater personal knowledge about concepts like velocity, gravity, Newton’s 1st Law of Motion, and friction – a knowledge that I believe will be invaluable to me in the future as I continue to think with my colleagues about materials and experiences that can be made available to children in order to facilitate their on-going  development as “scientific thinkers”.

I also asked my 10-year old son (and science buff) Will to theorize about what was evident to him in the video. Will was happy to share this thoughts (after being assured that this wasn’t some kind of test): “”He’s learning about force and placement. First, he’s learning that some things are placed better so they don’t slip off. And second, he’s learning that some things have better friction. For example, a smooth river rock would not be as good at staying on the lazy susan as, say, sandpaper.” While Will has never had a physics class either, he did attend a preschool from ages 1 to 5 in which a lazy susan was a material that was available on a daily basis. As his mother, I can’t help but wonder what the opportunity to experiment with a lazy susan through play may have contributed to his own interest in science and his ability to theorize about physics phenomenon.

The observation of Henry’s interactions with the lazy susan was important for me as an educator for many reasons, not least of which is the strong reminder of the importance and value of observation as a strategy to work in a style that looks to the experiences of Reggio Emilia for inspiration. Discoveries about learning processes are made possible when the time is taken to watch and listen to the experience of a group of 1-year olds, make the experience visible to others, and exchange ideas with others about our shared observations.

After observing the video collectively, the educators at The Nest have begun to ask ourselves questions based on what we have seen: