The Fig Tree – A Graduation Story 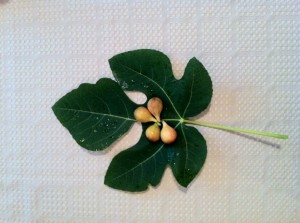 When I was a child, my grandmother had a huge fig tree.  It was very tall and wide.  It had branches that formed a little copse that my cousin and I could crawl into and hide.  Underneath the fig tree it was always cool and shady.  The roots were big and smooth and the earth was always just a little damp.  In the summer, the branches were dripping with fruit and hung even lower.

My cousin and I spent a great deal of time at my grandmother’s house and we often played under the fig tree.  The possibilities were endless for two small, imaginative girls on a hot summer day.  Sometimes we would just talk and eat the ripe figs; peeling away the milky skins to reveal the soft, seedy flesh.  Other days we would make up pretend stories or games and we would spend hours playing outside with almost no adult interference.  Don’t think for a second that my grandmother didn’t know where we were at or what we were doing.  In that magical way that mothers have, she always knew if we were doing something that we shouldn’t be.  But as two young children, our time was our own, our play was our own, our imaginations were the only limit to the refuge of the fig tree.

The end of July marked a significant milestone for The Nest.  We were completing our second year and graduating our very first and oldest student, Nathaniel.  Nathaniel happens to be my son and is a big reason why The Nest came to fruition.  I wanted to create a school where he could grow, thrive, be happy, explore, and challenge his already vivid imagination.  From my perspective as a parent, we have done a pretty good job.   He’s an independent thinker, a leader, an “idea man” and he has an incredible empathy and gentleness for the youngest children at the school.

As part of the graduation ceremony, we wanted to present Nathaniel with a tree.  We chose to do this because of all the reasons one would expect – the metaphoric image of a tree as a symbol of growth and strength with connections to the future and the past – the cycle of a lifetime and beyond.  I sent my husband, Adam, to find a tree for Nathaniel’s graduation.  What he came back with was a fig tree.

A fig tree is not something that I would have thought to ask for, but when he presented it to me my vision was flooded with memories of my past, my growth, and my strength – the cycle of my life.  It was an unintentional moment of clarity.

While planting our fig tree I talked with Nathaniel about the fig tree I remember from my childhood and I hope that the experience is significant enough in his life to become one of his first memories.  I hope that one day he has stories to share about his carefree childhood days – days where he was free to let his imagination run wild, use sticks and rocks and leaves to make a pretend world; where “real” and made up superheroes fly through the sky and have amazing powers; where a piece of string can become the basis for a whole afternoon of intricate imagery. 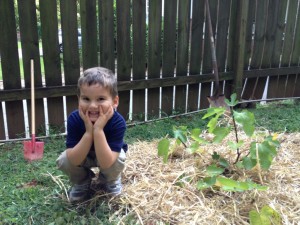 As parents and caregivers of young children, we are in a unique position to make decisions about the settings where children’s first memories will be formed.  As a parent and as part of The Nest team I will do my part to uphold the values that give time and space for children to experience that sense of freedom, those extraordinary relationships, the discovery of a special copse (either real or imaginary); and, as stated in The Nest’s values and beliefs:  Above all, to value the joy, inquisitiveness and sanctity of childhood.

4 Responses to “The Fig Tree – A Graduation Story”